If you don’t find the ssis-assembly error message on your computer, check out these troubleshooting tips.

I have SSIS that uses a script task to populate a data table with data from almost any of the many different file types that make up Excel. 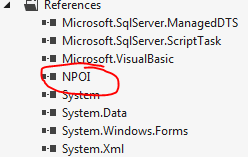 I am using NPOI to understand data from Excel, but I put the NPOI.dll file in the same folder as the ssis package and added it to the script task as a trusted source. I If this is really NPOI, I was just messing around every moment, but I also ran into the first hurdle!

My script contains basic code (which I copied from this SA answer):

but an error occurred with the following error message: The file could not be loaded or "NPOI, Version = 2.1.1.0, Culture = neutral, PublicKeyToken = 0df73ec7942b34e1" or the configuration associated with its dependencies could not be configured ... The system cannot receive the file if it is specified

But I choose the task of the script, there is attention and there are no errors.

If I comment out everything but the first line where I state that HSSFWorkBook named wb works well with each other.

Have I added the links incorrectly, or is it noticeably difficult to add links to a specific SSIS script task?

You have a serious weird problem. I have an SSIS package with multiple data streams and I am targeting a script component to generate AVRO files in the meantime. To write AVRO files I am using Microsoft.Hadoop.Avro.dll which I do not want to install in the GAC, simply and straightforwardly with thought. There is a cooling guide here, I was the audience. Now everything worked like a demo project last week. However, currently, when I try to include the same in my solution, the small data stream does work and everything is fine, but when the same piece of script is copied from one to another. data flow as well as other dataset they fail because they cannot find the whole assembly.

Please note – at the moment, with saving everything in theYes, the error “Loading a specific assembly”.

I end up helping you figure it out because it is confusing.

Here is the reflection mode I used, but it also works in one data stream and does not work in another (in the same package)

I will copy the assembly to DTS binn folder as my posts suggested.

How can I see a log composed of paths that the SSIS runtime definitely checks at startup? I’m not sure what other information and facts I can provide because this has gotten really weird, but if anyone wants me to add more important points, just let me know and I can edit the question to be more Details.

PS I also added once that it belongs to the GAC and it worked after that, but I hardly want to do it on the whole server, and also most of the reflection worked in another project

One more detail – last week, when all data streams were working in a test recording – it had a target version in fact 2017, which also appeared in contrast to the name of the project in Visual Studio. In the actual project locations I am having this weird problem saying that it works on a data feed. not yet in another, I was thinking about changing the read target server in 2017 (from 2016), but it still displaysXia in the name of the project, still in 2016. Could all of this be a problem? But then why doesn’t some project display name definitely change to include Even? 2017 if the target server variant is changed in 2017?

This could be described in a solution for which it worked on a case-by-case basis.

even the successful version of Targeter in 2017 does nothing with the display, but I doubt the problem will remain